The Junior Lake Property, 100% owned by Landore Resources, together with the contiguous Lamaune Iron property (90.2% owned) (jointly the “Junior Lake Property”), consisting of 30,507 hectares, is located in the province of Ontario, Canada, approximately 235 kilometres north-northeast of Thunder Bay and is host to: The BAM Gold Deposit; the B4-7 Nickel-copper-cobalt-Platinum-Palladium-gold Deposit; the VW Nickel-Copper-cobalt Deposit; Lamaune Gold Prospect and numerous other precious and base metal occurrences.

A highly prospective Archean greenstone belt traverses the Junior Lake Property from east to west for approximately 31 kilometres. The greenstone belt ranges from 0.5 to 1.5 kilometres wide and contains all of Landore Resources’ stated mineral resources and prospects. However, the greater proportion of this belt remains unexplored.

The BAM Gold deposit, discovered in December 2015, is located approximately 2 kilometres to the east of the B4-7 deposit and 1 kilometre north of the VW deposit. The BAM Deposit is situated midway along a 2.7 kilometre long, east-southeast to west-northwest trending MaxMin geophysical anomaly (MM-7) located along a highly prospective Archean greenstone belt which traverses the Junior Lake Property from east to west for approximately 31 kilometres. The favourable greenstone belt ranges from 0.5 to 1.5 kilometres wide and hosts multiple known gold occurrences including the Lamaune Gold Prospect.

The recently updated Mineral Resource Estimate (MRE) released in January 2019 has significantly increased the BAM Gold resource to 28,826,000 tonnes (t) at 1.03 grams/tonne (g/t) for 951,000 ounces of gold including 20,198,000t at 1.08g/t for 701,000 ounces gold in the Indicated Category. In addition, the estimation work has also modelled potential mineralised material  in target areas adjacent to the current delineated deposits for a possible 14,761,000t at 0.93g/t ounces gold for a further 441,000 ounces gold, in the ‘Unclassified’ material category. The BAM Gold deposit remains open to the east and west as well as at depth.

The BAM Gold Deposit is interpreted as an Archean-aged mesothermal gold deposit.  Findings from drilling to-date on the BAM Gold deposit revealed a lithological sequence consisting of leucogabbro and gabbro of the Grassy Pond Sill to the south, metasedimentary rocks of the BAM Sequence in the central portion, to mafic volcanics to the north. All lithological units have been subjected to variable shearing and deformation, markedly the metasedimentary unit.

The deposit consists of gold mineralisation that is hosted by sheared and altered rocks of the Grassy Pond Sill and the BAM Sequence.  The gold mineralisation is commonly observed in drill core to exist as visible gold that is hosted by very thin, foliation-parallel quartz-rich veinlets, hosted by highly fissile ultramafic sediments of the BAM Sequence, or by foliated rocks of the Grassy Pond Sill.

Metallurgical studies completed to-date indicate that 98% extraction of gold is achievable with conventional milling, grinding to 100% passing 212 micron followed by gravity separation (+65%) and cyanide leaching. Reagent consumption was very low with cyanide consumption at ±0.40 kg/t and lime consumption at ±0.60 kg/t.

This BAM Gold Deposit has the potential for the initial development to be progressed as a low cost, bulk tonnage, open pit operation.

Click to download the 2019 NI 43-101 Technical Report on the Resource Estimates For The B4-7 Deposit and The VW Deposit.

The B4-7 deposit is located in the centre of Junior Lake's mining lease area, approximately 3 kilometres to the northwest of the VW deposit. The B4-7 deposit mineralisation is hosted within a sub-vertical massive sulphide vein with stringers, net-textured and disseminated sulphides in the immediate hanging wall. The B4-7 deposit outcrops at surface with the upper 150 metres of the deposit being amenable to lower cost open pit mining. Below 150 metres, the grade improves sufficiently for underground mining.

The deposit has now been delineated over 800 metres of strike length with the B4-7 massive suphide mineralisation remaining open to the west along strike and down dip.

An upgraded resource estimate for the B4-7 Deposit has been recently completed in 2018. The total resource has been increased to 3,292,000 tonnes at 1.20% Nickel equivalent (NiEq) in the Indicated category and 568,000 tonnes at 1.26% NiEq in the Inferred category for a total of 46,661 tonnes of contained metal.

An Exploration Target has been identified down dip from the above resource containing a potential 1.5 Mt to 2.0 Mt of sulphide mineralisation of similar grade range to that which has been outlined to-date (potential 18,000 to 24,000 tonnes of contained metal). 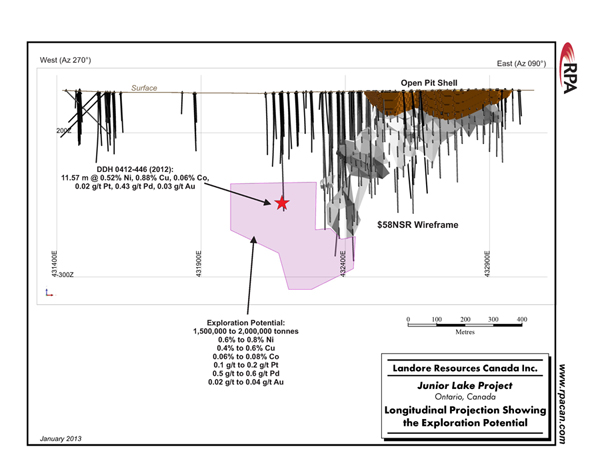 During 2012, infill and extension drilling was conducted on the eastern and western portion of the B4-7 deposit aimed at enlarging and bringing Inferred portions of the deposit to Indicated resource category. A total of 96 NQ size diamond core drill holes from 0412-367 to 0412-362 and 5 re-entry drill holes, for 22,827 metres, were completed. The program was highly successful, the results of which are reflected in the current resource estimate. 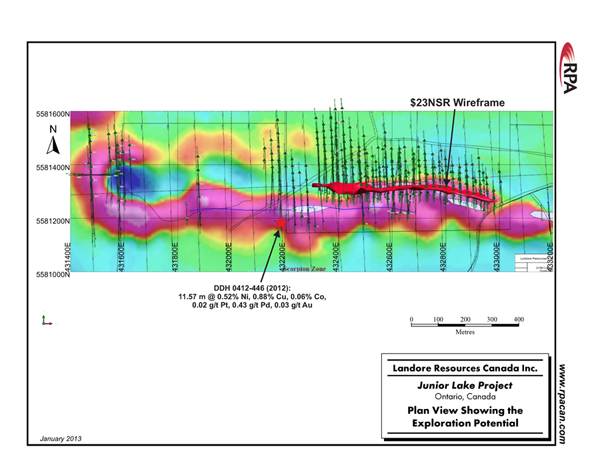 Preliminary metallurgical studies completed in 2010 indicate the nickel concentrate grades and recoveries of 13.5 per cent. Ni at 53 per cent. recovery with 17 per cent. Cu at 87 per cent recovery is achievable. Marketable concentrate can be achieved with further processing stages to upgrade the nickel, copper and PGM content with the rejection of pyrrhotite.

A deep penetrating ‘Direct Current Induced Polarization’ (DCIP) and Magnetotellurics (MT) survey has been completed on the Scorpion Zone (fall 2012). Results of the DC Resistivity section of the survey received to date are highly promising indicating the potential extension of the B4-7 mineralisation to line 800W. 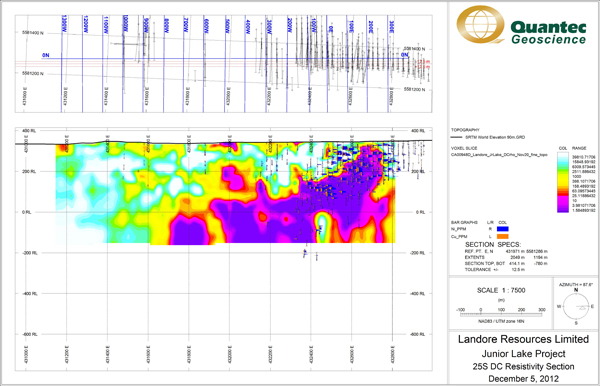 Click to download the 2019 NI 43-101 Technical Report on the Resource Estimates For The B4-7 Deposit and The VW Deposit.

The VW Nickel deposit (VW deposit), discovered by Landore in late 2005, is located at Ketchikan Lake in the central part of the Junior Lake. From 2005 to 2010, Landore has drilled 142 diamond NQ size holes for 35,339 metres on the VW deposit. The VW deposit outcrops at surface with the upper 150 metres of the deposit being amenable to lower cost open pit mining. Below 150 metres, the grade improves sufficiently on the main Katrina zone for underground mining. 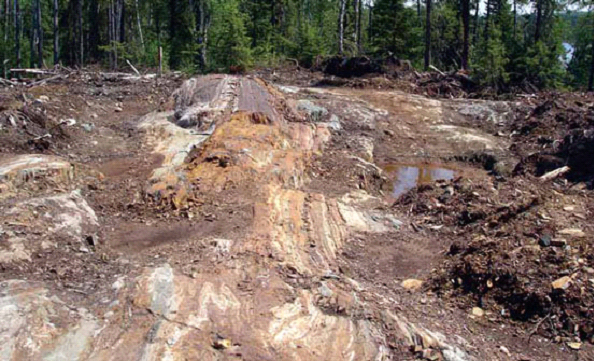 The BAM Gold Deposit, B4-7 Nickel-Copper-Cobalt-PGEs Deposit and VW Nickel Deposit are located approximately mid-way along a highly prospective Archean greenstone belt which traverses the Junior Lake Property from east to west for approximately 31 kilometres. The favorable greenstone belt ranges from 0.5 to 1.5 kilometres wide and hosts numerous other prospects for battery and precious metals, many of which Landore has conducted exploration works on.

In 2015, Landore engaged independent engineers to assess Junior Lake’s prospectivity for battery metals nickel, copper and PGEs. This assessment reaffirmed the favourable geological environment for nickel, copper, cobalt, PGE and gold mineralization notably along the Grassy Pond Sill, a gabbroic intrusion of up to 1 kilometre thick and a strike length of over 20 kilometres. The BAM and B4-7 deposits reside along this sill, and exploration works are planned to follow up on these and other previously-discovered prospects.

The city of Thunder Bay is located on the northern shore of Lake Superior and is the main supply hub for the mining centres of northern Ontario including Red Lake, Pickle Lake, and the Musselwhite gold mine. It has extensive port facilities and an airport providing daily flights to major provincial cities, as well as a rail line that provides access to both eastern and western North American markets.

Access to Junior Lake from Thunder Bay is via a sealed highway for 235 kilometres to the town of Armstrong and then via a well maintained forest products unsealed road for 100 kilometres that runs to the property.

The Canadian National Railway runs parallel to the Junior Lake property 13 kilometres to the south providing direct transport access to both the nickel smelting centre of Sudbury and the port facilities at Thunder Bay. In addition, Junior Lake has abundant water resources nearby and is just 10 kilometres from the planned hydro-electric power station on the Little Jackfish River.
Environmental Baseline Studies

In 2007, Landore retained Golder Associates of Sudbury, Ontario, for the implementation of an environmental baseline studies programme on the Junior Lake property including surface water sampling of various lakes and streams. This environmental baseline studies program is focussed on the mining lease area of the property containing the BAM Gold, B4-7 and VW Nickel deposits with ongoing surface water testing expanded to include lakes and drainage further out from the leases.

The purpose of water quality monitoring program is to characterize local baseline surface water quality and help in identifying potential receiving water environments. This data would be required as one component to the supporting documentation for permit applications to various regulatory agencies for the project is developed as a mining operation.

Bathymetry and fish habitat studies of Ketchikan Lake were conducted in 2007.  In 2008, a bedrock surface investigation of the northern portion of Ketchikan Lake was completed. Terrestrial and fish habitat studies were conducted by Golder over the property during 2008, subsequently reported in an environmental baseline study in 2009. Results of the vegetation surveys, wildlife surveys, and incidental observations did not identify any listed species within the site boundary that would trigger a specialized study.

The environmental and baseline studies are all pre-requisite for permitting requirements for the development of the BAM Gold deposit, B4-7 and VW Nickel deposits.

A pre-requisite for the development of the BAM Gold deposit, B4-7 and VW Nickel deposits is to secure tenure over an area of land sufficiently large to provide for development, mining, processing, infrastructure and buffer zones around the mining areas and for future expansion.

Landore has been granted six mining leases, which include mining and surface rights, over an area encompassing the BAM Gold, B4-7 and VW Nickel deposits. The leases cover total area of 7,862 hectares and have been granted for 21 years renewable for further terms of 21 years.

Within the Mining Leases, Landore has the right, subject to provisions of certain Acts and reservations, to:

Further information on Lamaune Iron Inc.’s mineral prospects can be found at https://www.lamauneiron.com/

The Lamaune Lease area of the Junior Lake property is held by Landore’s 90.3% owned subsidiary Lamaune Iron Inc., and is host to: