Landore completed four drilling campaigns between 2003 and 2005 on the Miminiska gold occurrence with 47 NQ diamond drill holes for 9,349 metres, focusing on two potential shoots within a known 800 metres strike length. Excellent results were received with grades reporting up to 131 g/t gold over 0.5 metres and 40.2 g/t gold over 2.3 metres.

An independent technical review was completed in 2009 on the Miminiska Lake property which established the presence of two exploration targets:

Both these exploration targets are open along strike and at depth and have good potential for expansion and upgrading to a mineral resource. 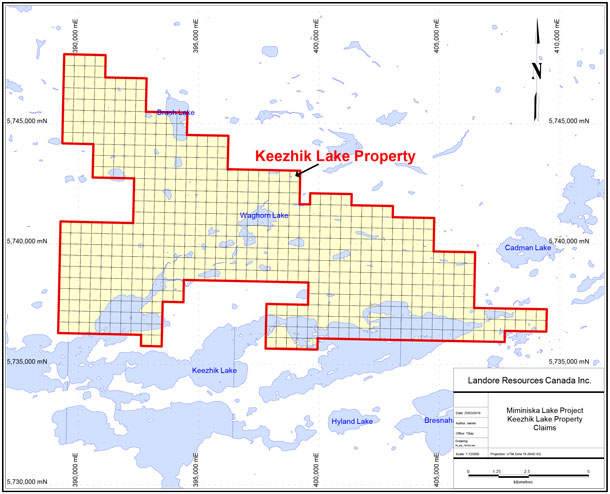 The Keezhik Lake area is adjacent to the North-Caribou - Totogan Shear Zone that is also host to Goldcorp's Musselwhite Gold mine, located 150 kilometres to the northwest. The Musselwhite Gold mine has produced in excess of 2.5 million ounces with 2 million ounces of gold in mineral reserve. The Keezhik Lake claims are also located in the highly productive and prospective Uchi Belt.

During Q3 2011, a field reconnaissance, mapping and sampling campaign was carried out at Keezhik Lake. Field investigation of geophysical anomalies, prospective geological features, and historical gold showings revealed several areas of interest on the property. Rock and soil sampling confirmed the existing gold occurrences, as well as identified new zones hosting lithologies prospective for gold mineralisation. Highlights of grab rock sampling include 19.82 g/t Au from a felsic outcrop and 2.03 g/t Au from a sheared melagabbro containing a one foot wide quartz vein.